A history of Mini BMX

By now you've probably seen them flying around your local skatepark or BMX track - Wildcat, Fatboy, Venom, Rocker, just some of the brands in existence today... so just where did these crazy little bikes come from? We thought it was time to dive a little deeper and pay homage to the real pioneers of Mini BMX bikes, as well as shine a spotlight on Wildcat’s foundation as a true OG in the Mini BMX movement. To begin, the correct term for the style is ‘Mini BMX’.

The uninitiated often misquote it as ‘rocker’ or 'mini rocker'. However, this is only a brand name, and just one of the myriad of companies that kicked off around the same time, well after the conception of Mini BMX. The true story goes back many years before this.

Unconfirmed accounts pinpoint origins in Indonesia circa the 1960s (pre-dating BMX!). Legend has it that riders adapted cart wheels onto crude frames making tiny, fully functioning bikes. However, they were ahead of their time and with only a small following, these miniature bikes faded into the mists of time.

True credit for the first modern-day Mini BMX must be given to several young Indonesian BMX riders working at ‘Kate Bike’ (pronounced kah-teh) who discovered these mythical tales of Mini BMX. Inspired by what they found, they assembled rudimentary set-ups and made videos, giving birth to the modern sport.

Thanks to Youtube and social media it spread rapidly, attracting several British and American companies into production and commercialization.

At this time Mini BMX's were a still completely new product with no specialized design parts available, so new Mini BMX productions could only use cart wheels, baby stroller parts, and inferior parts from kids bikes to make simple assemblies.
These early incarnations were not strong enough for advanced riding and often failed, resulting in the birth and death of a series of brands.

The Mini BMX factory began producing parts in 2012 for ODM during the initial explosion of the sport (ODM = Original Design Manufacture - design, manufacture, and supply to other name brands). After nearly three years of refinement and a hunger to step out of the shadows to deliver the very best, WILDCAT was born in Spain.

With a professional team of researchers and developers working alongside the REDBULL riders, WILDCAT successfully developed the first generation of ORIGINAL Mini BMX, the first full-strength Mini BMX with 100% specialized design and true BMX bloodline characteristics across their full range.

To this day Wildcat is the ONLY true Mini BMX brand (to our knowledge!) that owns and operates their production lines.

That is why you often see Wildcat parts on many of the other brands around the USA.

This allows constant evolution and innovation of our offering, keeping Wildcat well ahead of the competition.

2018 - the new generation and world's first aluminum Mini BMX frame was successfully developed alongside the new Turbo wheel. Total bike weight has been reduced to just over 9kg making this the lightest and strongest Mini BMX in existence by a long shot. The new design is an astonishing 3kg lighter than its predecessor.

2019 - Wildcat launches in the USA after incredible demand and request. Along the launch in the USA comes the brand new Pro Series - taking Wildcat to a whole new level of ride.

Including the Pro Turbo Wheel as standard, this aluminum and nylon wheel is made to be stronger and lighter than anything else on the market - helping you get higher highs and stronger jumps.

2020 - Amongst the craziness of the Corona Virus (COVID-19) Wildcat Mini BMX introduces the first full Chrome Pro Series BMX to the USA. Complete with the Turbo Wheel, we are also introducing the first-ever Gyro Kit on a Mini BMX bike.

To date, WILDCAT holds more than 20 different patents and continues to lead the charge in innovation and evolution of Mini BMX design and manufacturing, as well as supply genuine parts for other brands worldwide. WILDCAT lays claim to the highest weight and strength rating globally and also offers the best warranty policy of any Mini BMX brand. This is but one of the many reasons we chose to bring WILDCAT to the North American market.

WILDCAT uses only high-quality materials such as high carbon steel, chrome-molybdenum steel and aluminum alloy, and through innovative design and specific processes of welding, casting, forging, precision CNC, thermal treatments, polishing, and coating bring you the highest quality performance Mini BMX in the world. Why would you ride anything else?

We’re a small family business and we’re incredibly proud to bring you the BEST MINI BMX IN THE GAME. Other brands say similar things, but saying you are the best and being the best - as it turns out, is not quite the same thing.

Having two boys in our family meant that we were begged for the latest craze at the skate park, and so we started to check out the various mini BMX's on the market. After trying another brand first, we then discovered Wildcat - a craze that is sweeping Australia, New Zealand, and Europe.

I then visited the factory myself, before agreeing to become the exclusive distributor of Wildcat Mini's for the USA and Canada. The strength, innovation program, and safety of these Mini BMX's made it a no brainer for us to bring Wildcat to North America.

So what are you waiting for? Come join the Wildcat family and get shredding! The Winner of our September 2021 giveaway is...

Thank you to everyone who entered the Wildcat Mini BMX competition to win a Wildcat Original 2A Lazer Mini BMX bike.

We had such an exceptional response to our competition with 45,947 entries.

So it's with great pleasure we announce the winner of our competition is...

We got this bike for our sons 4th birthday he absolutely loves it! His first time riding with no training wheels and he had no trouble at all would definitely recommend!

I bought this for my 4 year old son with hopes to teach him how to ride a bike.
We were very excited and couldn't wait to get it.
The box had a delay in shipping, (i was supposed to receive the bike on Friday and I got it on Tuesday) and that was resolved so quick after the weekend I received the bike with NO ISSUES. Great customer service. Hands down.

Opening the box was exciting. I have zero knowledge in putting together a bike as I've never done it. But I am a crafty mom so I figured I could do it. And I did. I put it together so easily, watching the videos was simple and the instructions were clear. Even put the pegs too! Had to adjust the handlebars and the seat once after he was on it but I brought the tools in my backpack so I did it on the spot!  I wc been got embassies on how to maintain it worth great tips and tricks (my favorite).

My son just turned 4 in January, he is a smaller sized kiddo and was used to riding a balance bike, not a pedal bike, but uses a 4 wheeled scooter at the skate part and i figured I'd teach him to ride a bike with this bike, the wildcat minibmx and he did so on the very first day. As in he actually was riding it alone. We were persistent (both me and my son). Honestly, one of the absolute best experiences of my life. To watch my son try something hard, almost give up and sticking with it and succeeding.

I had to save for this bike for a bit and I wanted to say that it was worth every penny as the experiences I've had with my son, since day one of receiving it, have been PRICELESS.

so thank you, for making a great bike, I was hesitant as it was out of my budget, and had read another review of another parent who got it for her child and she felt it was unsafe and big and heavy. I'm glad I went with my gut and got it.

Much success to you all at wild cat mini bmx and to many more memories to come for me and my family! 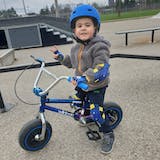 Wow Catarina, what amazing feedback. You’ve genuinely made our day. The whole team at Wildcat is absolutely passionate about exceeding peoples expectations with their Wildcat and hearing your feedback is the responses we want all our customers to have.
So pleased to hear that assembling the bike was easy for you and that your able to create some amazing memories with your boy.
We know our bikes aren’t the cheapest on the market, but we aim to make them in a way that they will last, will be the best in market, and that you don’t have to spend a fortune fixing an inferior product.
Thanks once again - can’t wait to see what he can do with the bike for the years to come.
You’ve made our day. Thank you.