The Turbo hub core is 100% aluminum forged and CNC tech making it stronger, truer and far lighter than anything else on the market.

This new hub design rolls on an incredibly tough and light nylon material rim, all held tight by an integrated lock system which as a bonus makes changing tires a breeze.

Wheel sets come with axles, bearings, driver and all hardware. Tires and tubes not included.

You will definitely stand out from the crowd when you add the Pro Turbo Wheel to your Mini BMX.

Collections: all, Parts and Accessories

We ordered a tube and tire for my son’s bike. We couldn’t find a replacement for his brand so we used Wildcat instead. Fits perfect! No size issues... We’ll be using Wildcat in the future!

Thanks for trusting us Dean - we so appreciate it. Glad you found us - and we should have a lot more color options in stock in the next few weeks.
S
S.C.
Great tires, a bit overpriced

I bought these for my kid's rocker bmx after his stock tires fell apart. Most of the suppliers don't have mini bmx tires in stock right now, these were more expensive than the other suppliers but at least were available. My kid says the tires are rad, they allow 45 psi so are faster than his old tires, grip is good but when he wants them to slide they will. The blue swirl looks rad. They are a bit wider than the stock tires on the rocker so the chain is really close to them but they don't rub enough it will be a problem. I would give them 5 stars if they were not so expensive, I pay less for premium tires for my 20 inch bmx and these look like the same tires that the other mini companies sell for quite a bit less. But I was just happy to be able to find tires at all. Shipping was fast, they arrived within a week of ordering despite the fact that they shipped from China, perhaps that accounts for some of the extra cost.

Thank you for your review Shamash. We are really pleased to know your kid is loving his new tires and that they are performing better than his old ones. We are trying to keep the price on them as low as we can but due to the tire shortage at the moment, and the fact that FedEx have doubled our shipping cost, we are unfortunately having to have the price where it is. Hopefully this will change when our full range of tires are back in stock.
M
M.W.
2 year old loves big bro’s bike!

We originally bought a Wildcat Mini BMX bike for our 8 year olds bday back in April. Now we will be purchasing one for our boy turning 3 in September. He learned to ride with no training wheels thanks to the perfect tire size and height of the mini bike! 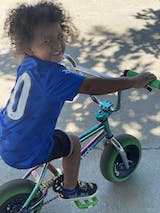 That's the best Michelle - we know of many 3 and 4 year olds who have been learning to ride on a Wildcat but this is exceptional to hear your 2 year old loves it!! So good.
K
K.L.

They where great it is spendy but they are made with care and get here fast.

So glad we could pimp your Mini Kayden.
L
L.M.
Tires

They work great - a bit $$$ but arrived quickly

My brother loves the bike ! He rides it everyday. Thank you so much for your service 😌

Thanks for your feedback Shane - we love our Wildcat Pride too - we always strive to make sure you are super happy with our service, bikes and parts.
M
Pro Series Joker Green | Disc Brake | Pro Turbo Wheel M.V.

This is our 2nd mini bmx from Wildcat! This bike has a beautiful paint job. Love having a rear break! The pro wheels are super awesome. We’re mostly in our late 30s over here at Fat Bike Asinine and these little bikes are stupid fun. Bike is very durable and can definitely takes some abuse. You can’t begin to remove your smile while riding or watch others ride. If you’ve got youngsters, this is a stellar bye as they’ll never grow out of it and probably not destroy it. Thick dropouts. Bike would survive falling off cliff and still be fine! 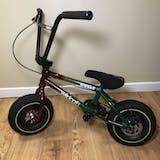 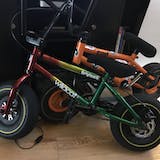 Ian, thank you once again for ordering your second Wildcat. You are developing your own little collection there. So pleased you have upgraded to a bike with the Turbo Wheel and disc brakes - we know you'll see a huge difference over the Original 1s. Keep shredding - can't wait to see your videos.
O
Original 2A Royal Purple | One Piece Crank | Disc Brake O.y.
Sweet bmx

Would highly recommend to anyone looking, Already know a few other people who will be buying one after checking out mine.

Check out my unboxing video and initial thoughts:
https://www.youtube.com/watch?v=UDZyCdo76kg