To celebrate the launch of Wildcat Mini BMX in the USA we ran a competition over the months of June and July. One lucky owner of a Wildcat Mini BMX had the chance to win a second Wildcat so they can shred with their friends and family.

We are excited to announce that Patrick Hertel is the winner of a second Wildcat Mini BMX.

Patrick purchased a Wildcat Pro Series BMX Mini Royal Blue and has been rocking it with his daughter and work mates - now he doesn't have to shred alone.

Given the overwhelming number of entrants into the competition, we decided to draw out two runners-up to also win some Wildcat gear.

Jamie Kehn has won a set of Wildcat Pro Pegs.

We will be in touch with each of the winners to confirm which colors you are keen for.

Congratulations to the three of you - we can't wait to see you shredding in style!

Keep posted for the announcement of our next comp - we are going to make it even bigger and better.

On a side note, Wildcat Mini BMX is pumped to be selected by Feedspot.com as one of the top 75 BMX Blogs and Websites for BMX riders to follow in 2019.

Given how new we are to the market in the USA (although, we have been around for a long time in Europe, Australia and New Zealand), we consider it a huge honor to be featured in this list.

We look forward to climbing the list over the coming months as we continue to gain traction in the US market.

What is a Mini BMX Bike?

Have you been looking around to find a BMX bike and wondered what all the fuss is about these smaller 10” BMX bikes that you’ve seen flying around the skatepark or BMX track? Well, in this post, we are going to unpack what it means for you to shred harder on the mini BMX craze that is taking over neighborhoods near you.
Read More

Just as COVID-19 kicked in, we were able to get one of our Pro Series into the hands of Ryan Williams for him to test out on his Mega Ramp.

Check out how tough this little blue guy is!!

It's our first birthday!!

12 months ago, Wildcat Mini BMX finally launched in the USA after so many of you had begged us to bring the world's best Mini BMX bike to the land of the free. Wildcat Mini BMX is still operating and our warehouse is sending bikes out every day.

We have plenty of stock located in Charlotte, NC

They where great it is spendy but they are made with care and get here fast.

Sleeves made it easy to mount and bolt! 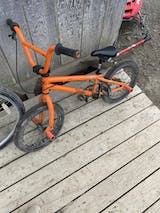 I ordered the wildcat disc brake for my son's Fatboy Pro mini bmx bike. Installation was super easy. I am no bike mechanic by any stretch of the imagination, and it only took me about 20 minutes to install. The trickiest parts of the installation were adjusting the disc so it sat evenly between the brakes, and adjusting the brake cable. Other than those minor adjustments, it's pretty straightforward to install with Wildcat's installation instructions on their website.

The brakes are so much better than the stock caliper brakes on the mini bike! My kid loves his "upgraded" bike, and I love that the brakes work great and don't rub on the rear tire like the old caliper brakes. Thank you for this awesome product!

That's the best - so glad the brakes are working out well on your Fatboy Mini BMX and that you found it easy to instal them. Enjoy the upgraded ride.
123
Powered by Judge.me